The Companies That Treated Women as Wombs | The Atlantic

To say that the recommendations about women and alcohol issued last month by the Centers for Disease Control and Prevention received a drubbing would be putting it lightly. Intended to help prevent fetal-alcohol spectrum disorders (FASD), the CDC guidelines urge women not only to stop drinking during pregnancy or while trying to become pregnant, but also to avoid alcohol altogether if they are sexually active and not using birth control—irrespective of their parenting intentions.

As Julie Beck and Olga Khazan noted in The Atlantic, the advisory struck many as condescending, suggesting that women who drink and are sexually active will engage in lots of risky sex. It also presumes that any woman who slips up and has unprotected sex, but who definitely doesn’t want children, won’t be proactive in correcting course. Put differently, the advisory assumes all women are mothers waiting to happen. 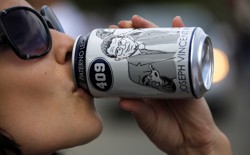 Protect Your Womb From the Devil Drink

Even if that were somehow true, though, the agency’s focus on women is still frustratingly—and misguidedly—narrow. This “for mothers only” warning ignores researchdating back more than a decade showing that alcohol consumption by men is linked to deformed sperm, which in turn can cause problems ranging from miscarriages to low birth weight to cognitive impairments. In 2014, a Korean study linked fathers’ drinking to a statistically significant range of physical and cognitive abnormalities, including the collection of symptoms found in FASD.

Parsing through the backlash to the CDC’s guidelines, it’s easy to feel like we’ve been here before. And we have: Just a few decades ago, a landmark Supreme Court case centered on the same idea of woman as wombs-in-waiting. In the mid-1980s, the United Auto Workers filed a lawsuit on behalf of its members against the battery manufacturer Johnson Controls, challenging the company’s “fetal-protection policy.”  The policy provided that unless a female employee could prove she was infertile, she could no longer work in any area of the company’s 16 plants that exposed her to lead.  The company cited potential harm to female employees’ fetuses—despite already having a policy that allowed pregnant workers to temporarily transfer into safer jobs—and the potential for liability, should a child disabled by in utero exposure later decide to sue Johnson Controls. (Such a case had never been filed.)