The differences between millennials, Generation X and baby boomers determine not only the shows on our screens and the content of our websites, but the nature of our jobs and the geography of our cities.

One hindrance is that researchers use inconsistent years to date generations because there aren’t any official, semi-official or even pseudo-official definitions. The generation known as millennials is defined as beginning with births in 1978 or 1980 or 1981 or 1982 or 1983 or 1985. And the last birth year of the millennial generation is variously placed at 1994 or 1995 or 2000 or 2003. If you’re in your 20s, you’re almost definitely a millennial. But the periphery is undefined. 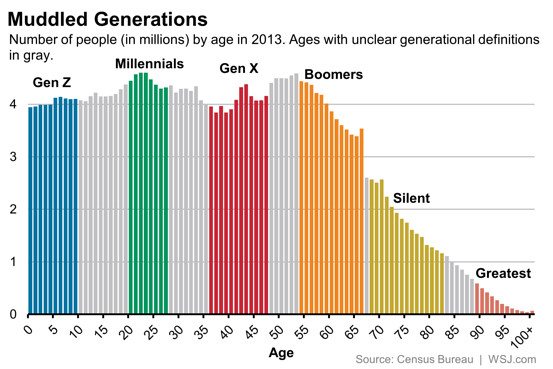 Between every generation there are gaps where researchers use different dates. All told, about 110 million Americans were born in years that are not consistently assigned to one generation or another — or about 35%.

But we could fix that. A number of agencies could step forward and create demarcations around U.S. generations. The Census Bureau makes a study of the U.S. population and is in a position to identify shifts. The Bureau of Labor Statistics knows the ins and outs of the U.S. workforce. The National Bureau of Economic Research, a nonprofit research organization with which many of the nation’s leading economists claim affiliation, steps in to sort through the numbers and provide dates around the recessions and recoveries of the U.S. economy.

The great benefit of NBER’s declarations are not that its dates are indisputable. The value of NBER’s chronology is that it creates a standard that researchers can use to compare apples to apples, even if one could have small quibbles. It’s crystal-clear that the economy experienced a sharp recession in 2008 and 2009 just as it’s crystal-clear a new generation of Americans was born after World War II.

Phrased in terms of birth year, people born from 1990 to 1994 have an unemployment rate of 10% and those born from 1980 to 1989 have 6.2% unemployment. As it happens, these are roughly the birth years that some researchers assign to millennials. 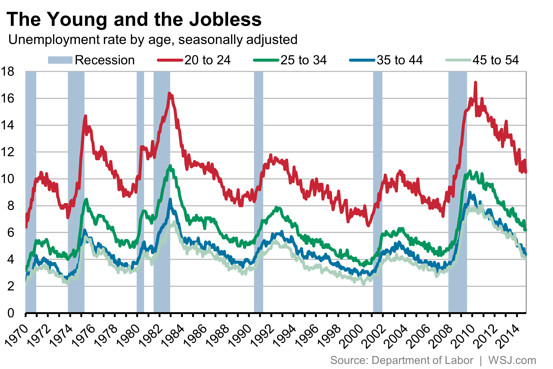 So the unemployment rate of the young is always higher than the unemployment rate of the old, an example of a life-cycle effect. But how has the labor market varied for different generations? What is the cohort effect? The existing surveys ask the right questions. But their data simply isn’t sorted this way, even though it’s a topic of keen interest from both academics and the general public.

The Labor Department is reluctant to release data with samples that are too narrow. Releasing statistics for people born in a single year may be too much to ask. But releasing statistics in five-year blocks, for example, would create much larger samples. Such data would allow for easy comparisons of unemployment rate and wages over time of people born in 1981 to 1985 versus those born in 1976 to 1980. This could yield interesting insights into the differing outcomes for people who were just beginning their careers when recession struck versus those who already had a strong foothold into the labor market.

If generations were clearly delineated, and high-quality statistics were made available to track their process, much of the low-quality rubbish about generations would be crowded out. And best of all, it wouldn’t require new surveys or statistical agencies.